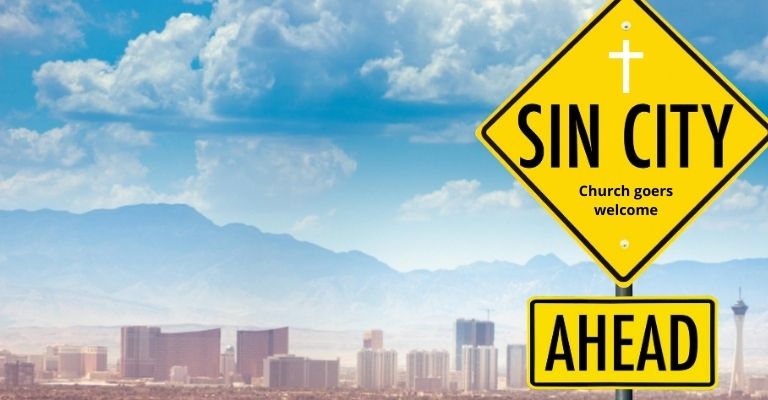 Christians in Las Vegas have traded their houses of worship for casinos as churches are only allowed to permit 50 parishioners at a time while casinos are operating at 50 per cent capacity, giving them ample space to hug since there’s nothing in the Bible about how “thou shall not social distance from your fellow man.”

Nor does it say anything about face masks and hand sanitizers, which is probably for the best as men and women of faith gather in casinos across the city to give praise to their Lord and saviour, Jesus Christ.

Evangelicals for Trump recently “enjoyed a packed house with prayer and praise” at an event in Sin City, full of “prayer and praise,” according to a Tweet by evangelical Christian leader Ralph Reed. “Casinos can operate at 50 per cent capacity. So we are praying in a casino.”

The Tweet doesn’t specify what the parishioners were praying for, possibly luck on the slot machines or at the craps tables, but they can be seen embracing and enjoying the music in a short video.

President Donald Trump’s 2020 deputy press secretary Ken Farnaso said that “in a time when many Nevadans can’t go to church because of overreaching restrictions, President Trump’s campaign is bringing together evangelicals from across the community to pray, worship and discuss key issues facing Americans in the November election.”

Reed was not the only attendee who spirited off a Tweet about the blissful event. Courtney Holland of Human Events felt compelled to share something with her followers too.

“Our Churches have been shut down for FIVE months. In Nevada, you can go to a casino but you can’t have more than 50 people at church. Well tonight, HUNDREDS of us brought the church to the casino with #EvangelicalsForTrump in Las Vegas.”

Proponents of constitutional rights to freedom of religion filed their grievances with the Supreme Court earlier this year, but on July 24 the request to disallow restrictions on houses of worship in Nevada was rejected.

A five to four vote in the Supreme Court meant that the request was not even heard, which is common practice when justices review emergency applications.

Justice Samuel Alito replied to the application in writing: “The Constitution guarantees the free exercise of religion. It says nothing about the freedom to play craps or blackjack, to feed tokens into a slot machine or to engage in any other game of chance. But the governor of Nevada apparently has different priorities.”

He went on to say that “a public health emergency does not give governors and other public officials carte blanche to disregard the Constitution for as long as the medical problem persists.”

Governor Steve Sisolak is not showing any signs of easing any restrictions on worshipping any time soon. The state of Nevada has continued to say that mass gatherings of people were being handled “the same as or worse than houses of worship.”

Justice Neil M. Gorsuch added to Alito’s dissent, saying “the world we inhabit today, with a pandemic upon us, poses unusual challenges. But there is no world in which the Constitution permits Nevada to favour Caesars Palace over Calvary Chapel.”

Unheard prayers across the nation

Failing to acknowledge that the coronavirus must be a part of God’s plan, begging Him to end the pandemic has fallen on deaf ears. Heaven has been unusually quiet about the coronavirus despite religious leaders calling for a day of prayer to end coronavirus.

The Higher Committee of Human Fraternity (HCHF) dedicated May 14, 2020, to a day of “fasting, works of mercy, prayers, and supplications for the good of all humanity,” so that God would end the pandemic.

“We implore God to help us overcome this pandemic, to restore security, stability, health, and prosperity so that our world may become, after this pandemic, a better place for humanity and fraternity to live in,” a statement from the HCHF said.

Humanity and SuperLenny is still waiting for a reply.

Yggdrasil and ReelPlay team up to launch Jaguar SuperWays

Top software providers ReelPlay and Yggdrasil Gaming have teamed up to bring Canadian players Jaguar SuperWays. The game is a slots variation, with players embarking on…

The Atlantic Lottery Corporation is offering CA$20 in gaming credits to first-time players who register an account on the Crown corporation’s online gaming site.…

Lotto Max gives away hundreds of millions of dollars each year, explaining why it is one of the most popular lottery games with Canadians. This March, Lotto Max continues…

Playgon Games has just received approval from the Malta Gaming Authority for its Type 1 Gaming Service Licence. This exciting news will make it possible for Playgon to…

Casinos and Bingo Halls to Reopen Soon in Alberta

Casinos and bingo halls in Alberta are getting ready to reopen their doors to patrons at the end of the month. Preparations are underway to ensure a safe return to…