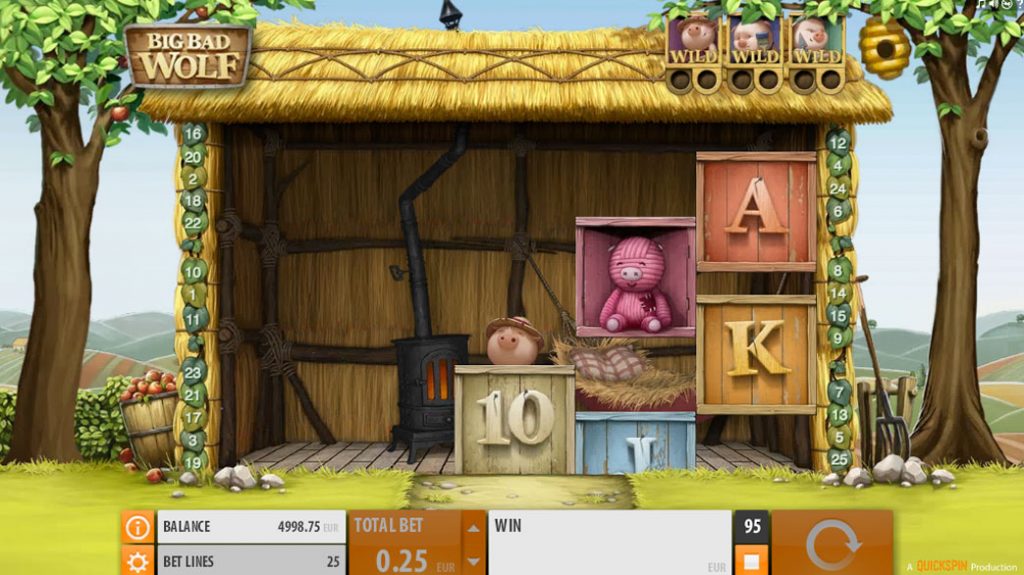 No need to be afraid of this Big Bad Wolf. In fact, in this casino game, we’re totally taking his side! Join forces with the hungry wolf to blow down the houses of the three little pigs, and in return score some cool prizes. Fun and quirky in its design, Big Bad Wolf offers a different take on cascading reels, instead of having the symbols get ‘blown away’ by the huffing, puffing wolf. This allows the next bunch of symbols to tumble down in this five-reel game that boasts 25 pay lines. Line up the symbols to destroy those houses of straw, wood, and brick – just like a hungry wolf would!

A honey beehive Wild symbol is the highest paying one in the game, replacing all others except the Scatter. But Big Bad Wolf boasts a second Wild, the Pig Turn Wild, which is activated on every second ‘swooping’ win. Old Wolfie himself is the Scatter symbol; spin three of these anywhere on the reels and you’re in line for ten free spins, which can often turn into many more as the cascade happens. Of course, as a Wolf, you’ll need to howl at the moon. Collecting moon symbols is a way to grab more free spins; three moons getting two spins, and six moons landing two free spins plus a 2x multiplier.