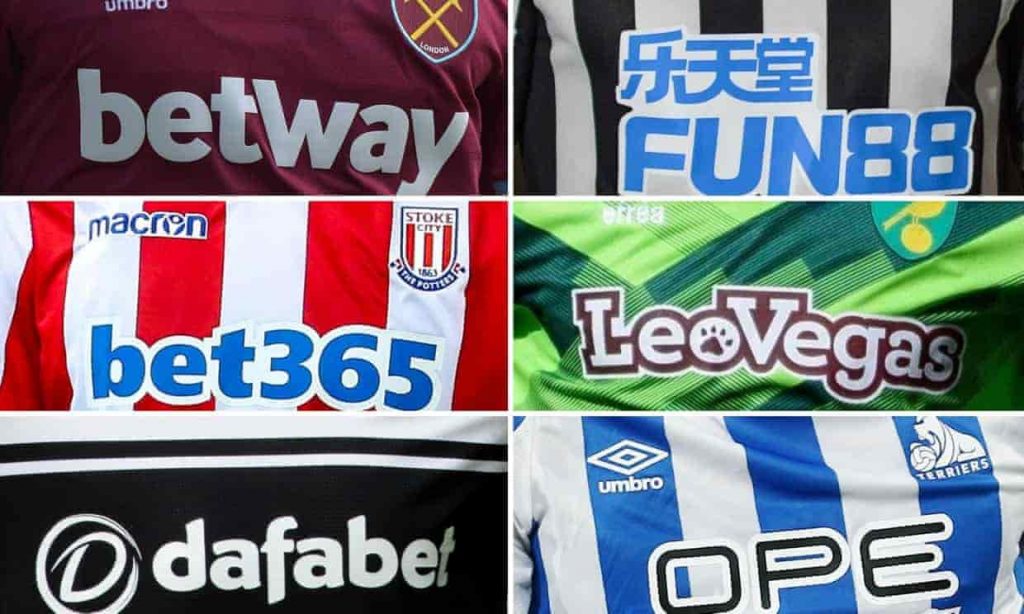 Football jerseys are one of the best market tools for advertisers in the world. Millions of viewers tune in every year to catch the English Premier League and Champions League. Whilst football clubs often have a number of high profile sponsors it is their bookmaker sponsors that have come under fire. In the past year,  a growing number of responsible gaming campaigners are calling on football clubs to reconsider their gambling ties.

How many UK football clubs are sponsored by bookmakers?

Unsurprisingly the number is quite high. According to The Guardian “, Nearly 60% of the clubs in England’s top two divisions will have gambling companies on their shirts this season – nine of 20 in the Premier League and a staggering 17 of 24 teams in the Championship.”

Besides team kits, bookmaker sponsorship is also found on the leagues themselves. Sky Bet is a well-known sponsor of the Championship, League One and League Two divisions.  This deal has been in place since 2013. Earlier this year it was announced that Sky Bet would pay millions of pounds to extend the deal from 2019-2014.

Although this brings in money to the clubs and supports football, many charities and groups have expressed concern. “This is worrying,” Gambling Watch UK’s Professor Jim Orford told PA Sport. “There is evidence that gambling is becoming ever more normalised, particularly among young people, so that increasingly betting is seen as part and parcel of following and supporting one’s favourite sport or team.”

In response to questioning over the SkyBet deal, EFL spokesman said sponsorship deals with gambling firms “make a significant contribution to the ongoing financial sustainability of professional football at all levels” but said the league has agreed to an understanding with Sky Bet to ensure that the relationship is “socially responsible”.

A look at the stats

Figures published by the UKGC there are 430,000 adults with gambling problems in the UK. There is also an estimated extra 55,000 people aged 11-16 who are classified as “at risk of developing a problem”.

The future of sponsorships

In the opinion of Lenny is very unlikely we will see an end to gambling sponsorships in football any time soon. However, it is likely we will see more efforts to promote responsible gaming practices. This may include the sleeve badge initiative or more warnings placed in-text advertising.