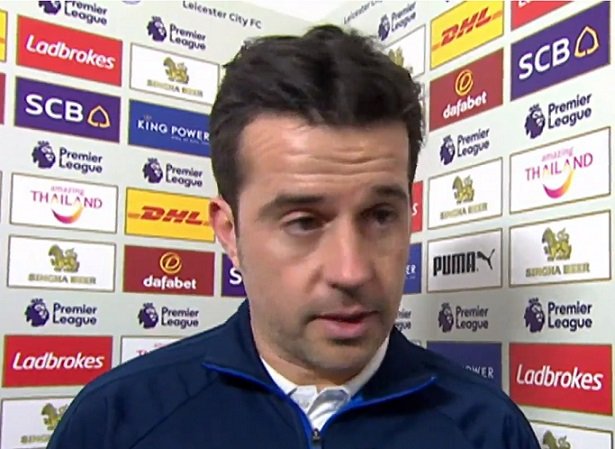 Everton have sacked manager Marco Silva 18 months after he took charge of the team, following a miserable 5-2 defeat by Liverpool at Anfield.

Everton now sit uncomfortably at 18th place in the Premier League table, after losing three games in a row.

Former striker Duncan Ferguson has taken over the reins until a new permanent manager is found, and will be responsible for managing the side against Chelsea on Saturday.

Everton said they aim to appoint a new manager “as swiftly as possible“.

Silva is the fifth managerial dismissal in the Premier League this season. Javi Gracia and Quique Sanchez Flores were sacked from Watford, Mauricio Pochettino was given the boot by Tottenham, and Arsenal said goodbye to Unai Emery.

The position of manager at Everton has been something of a revolving door ever since the long-serving David Moyes left the club in 2013 to take over Manchester United.

Moyes was succeeded by Roberto Martinez, who led Everton to 5th place in the Premier League. The Spaniard helped the club amass their best points tally in 27 years, but was sacked in 2016 after a poor Premier League performance that year.

Martinez was replaced by Ronald Koeman, who was sacked in October 2017, after Everton fell back into the relegation zone.

Sam Allardyce was appointed manager the following month but was given the boot just six months later after an incredibly unsatisfactory performance. That was when Silva stepped in. His first season seemed like an adequate start – Everton finished in 8th place – but the start of this season has left the team in the relegation zone, resulting in his sacking.

Does Everton want Moyes to come back?

Having spent 11 years as manager of Everton, David Moyes’ name has been put forward as an interim successor to Silva. He could also bring another Everton alumnus, Tim Cahill, back as his assistant.

However, supporters are largely against Moyes’ return. His track record since leaving for Manchester United in 2013 has been largely unimpressive, and many believe this would be a step backward for the Toffees. What the team needs is someone who will stop the ongoing floundering and put them back on the right track to victory.

Vitor Pereira, manager of Shanghai SIPG and Marcelo Gallardo, manager of the Argentinian football club River Plate, are being mentioned as frontrunners to take over the team. A few other notable names mentioned in connection with the role include Bournemouth manager Eddie Howe, former Newcastle United boss Rafael Benitez, former Tottenham boss Mauricio Pochettino, and Mikel Arteta – although Arteta seems more likely to replace the vacancy at Arsenal, after Unai Emery was shown the door.

Former player Duncan Ferguson, who was appointed as caretaker manager, could also be given a permanent role if he manages to impress in the next few games. Whatever the outcome, you better believe Lenny is going to be watching!