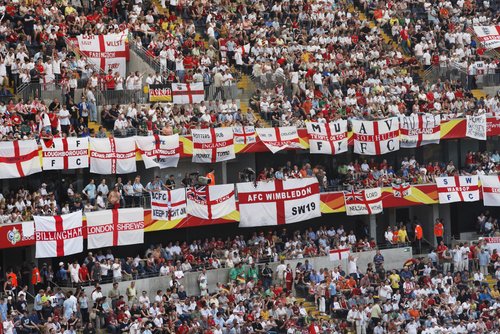 Do you have it in you, Roy?

Ah, England. The home of the beautiful game of football. For a long time, the English considered themselves to be the natural world champions of football. They were so sure about this that they refused to participate in the first world championships because they did not feel like they had to prove anything. So it came as a shock when England lost their first-ever world cup game 1-0 to the amateur team of the USA in 1950. Since then, England has only managed to win a single title: The 1966 world cup which they themselves hosted. The supporters sure hope that this tournament will break this curse when it is in the 50th year. But it is probably a real long shot.

During the 2014 World Cup Russia was the only team to have only players from their domestic league in the squad, with England having only Fraser Forster from Celtic playing outside the English Premier League. This year the tables have turned. England is the only team to have only players from the domestic league, with Russia having Roman Neustäder from Schalke 04. This might prove to be one of the biggest advantages for England. The players know each other well as they have very often faced each other at least two times during the season, and many of them are also teammates at their clubs. Only eleven clubs are represented in the squad, and if we take away those clubs who have only one player represented, we end up with only six clubs.

Goalkeeper: Although good, we have to say that Joe Hart is quite some distance away from being one of the really great goalkeepers of this tournament. The goalkeeper position is neither a big strength nor a weakness in the English squad.

Defence: As with the goalkeeper, it is hard to be neither optimistic nor pessimistic about the English defence. John Terry has played his last game for England, and this means that Gary Cahill is taking over as the leading defender.

Midfield: From here on we might go get slightly optimistic about the English squad. Jack Wilshere is back, but he has been out with an injury for almost the entire season. How fit he is will be an open question. Many of the midfielders either have played or is playing together for Liverpool. The English midfield might be the one where the players know each other best in the entire tournament.

Attack: From slightly to very optimistic. The English team have one of the biggest collections of quality strikers in the entire championship. The mix of the old routine and young hunger might prove priceless. Will Jamie Vardy continue his excellent season?

It is hard to consider the English squad to be very much better than above average. I can’t in any way imagine that this squad will be able to get any results against the stronger team. With a hard group where they will meet Russia, Wales and Slovakia, there is a small, but very real chance that England might fail and only finish 3rd. Chances are that they will probably finish 1st, might finish 2nd or make a mistake and finish 3rd.