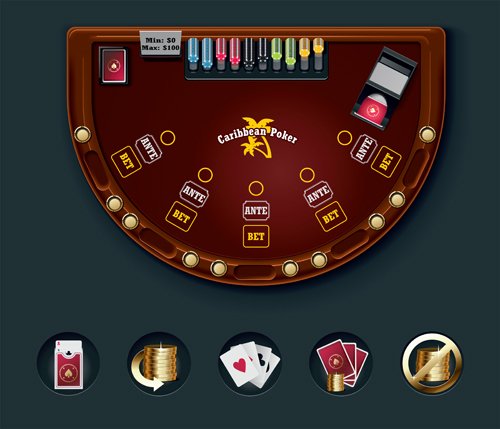 Despite having the word poker in its name, Caribbean Stud Poker is actually classed as a casino game rather than a poker game. The difference? Well, in a real poker game you will play against other players. In Caribbean Stud you only play against the dealer. Similar to blackjack, when you play, the other players at the table don’t matter. It’s only the final total between yourself and the dealer that actually matters. This guide will help you to understand Caribbean Stud, offer some strategies and tips for how you can get ahead.

How to Play Caribbean Stud Poker

Caribbean Stud is played with a single 52-card deck, which is randomised using a shuffling machine, dealer or a random number generator depending on the game format in which you are playing it. Similar to other versions of poker, to begin to play every player must place an ante bet. This will then kick start the round of play. If you’re familiar with other poker variants, you will be relieved to know that the hand values are the same as that of Texas Hold’em. Here’s the full list from highest value to lowest:

This is the point of decision – how good is your hand? You’ll need to refer back to those hand rankings in order to make a really good choice at this point. If you don’t think your hand can win, fold. If you fold you will lose the ante bet you placed, but nothing more. However, you might choose to continue. In which case you will have to place another bet, which must be double the size of the ante you placed. Once you’ve chosen to fold or bet, all cards are placed face up.

When the Dealer Qualifies

Once all players have made their decisions the dealer will then reveal their remaining cards. These will be arranged into the highest ranking. The dealer will then try to qualify for the round. This means that the hand needs to hold an ace-king or better. If the hand is ranked lower than this, the dealer doesn’t qualify. If the dealer qualifies, players will then compare their hands to see if they rank higher than the dealer. If you win, you’ll get even money on the ante, plus a payout based on your hand’s strength.

When The Dealer Doesn’t Qualify

However, there are times when the dealer will fail to qualify. In these instances, all the players who called and stayed in the game will win. However, there is a catch here. You will actually only win back your ante bet. The call bet is returned to you but not paid out. This can be really annoying when playing this poker variant, especially if you have a great hand. For instance, you may have a royal flush, but if the dealer doesn’t qualify – there’s no payout.

If you have a hand that holds a flush or better than you will be eligible to win some or all of the jackpot. The amounts that can be won will differ between casinos but there are still some more common payout options open to you. If more than one player manages to qualify for the jackpot then it’s usually split. However, some casinos will have an additional rule that the player on the left of the dealer will win the jackpot, but it’s highly unlikely two players will ever get a straight flush together!

Now that we’ve got some basics out of the way, let’s have a look at the rules. One of the main rules is that you cannot share or show what’s in your hand to the other players, that is until the showdown portion of the game. Most Caribbean Stud games will have additional rules such as only playing one hand per game, and keeping the cards in view of the dealer at all times. You can only touch your cards one time when you make your decision, then there’s no further touching.

We’ve already covered the other main rule – that of the dealer qualifying or not and the outcome of that for you as the player. There is a final rule relating to the progressive jackpot and this is that it is only based on the strength of your hand. Winning the jackpot occurs with no relation to the strength of the dealer’s hand, so if they don’t qualify, you will still get that whopping payout. It makes a nice change from not winning anything if the dealer doesn’t qualify!

It’s always a good idea to have a strategy in place when playing Caribbean Stud. For instance, if you have a pair or better you should always place the call bet. You should also place that second bet if you have a king and an ace in your hand and one of the other cards matches the dealer’s visible card. It’s also a good idea to call if you’re holding an ace, king, queen with two other cards that are higher than the dealer’s card. Outside of these options, fold!

The house edge will change depending on the payout schedule the casino offers. Generally, though, the house edge sits at 5%. This is calculated based on the fact that roughly 44% of the time the dealer will not qualify and, therefore, you will only win back your ante bet. The rest of the time the dealer will qualify and you have a 50% chance of beating these odds. But, to stay in the game, you have to triple the money you are spending, and even then you might lose it all.

Coupled with the strategy outlined above, these tips should enable you to get some good in-game tactics going. For instance, you should always raise when holding a pair or an ace-king when the dealer’s card is 2 to queen. However, you should always fold if you have less than ace-king. Even just an ace-queen should be an automatic fold. This is because it is lower than the dealer’s required qualifying hand – you will lose! If the face up card of the dealer is an ace or king and you have nothing to match that, fold.

Nowadays there are so many options for playing this fun game. Whilst this article outlines in-person Caribbean Stud, the strategies, payouts, and tips hold true across all versions. With a wealth of online casinos springing up, you will also be able to play this game in numerous different formats. There are virtual games played against a computer or live dealer options where you can sit at home, but feel like you’re in the casino. Whichever method you choose, this is a thrilling game that’s sure to test your skills.