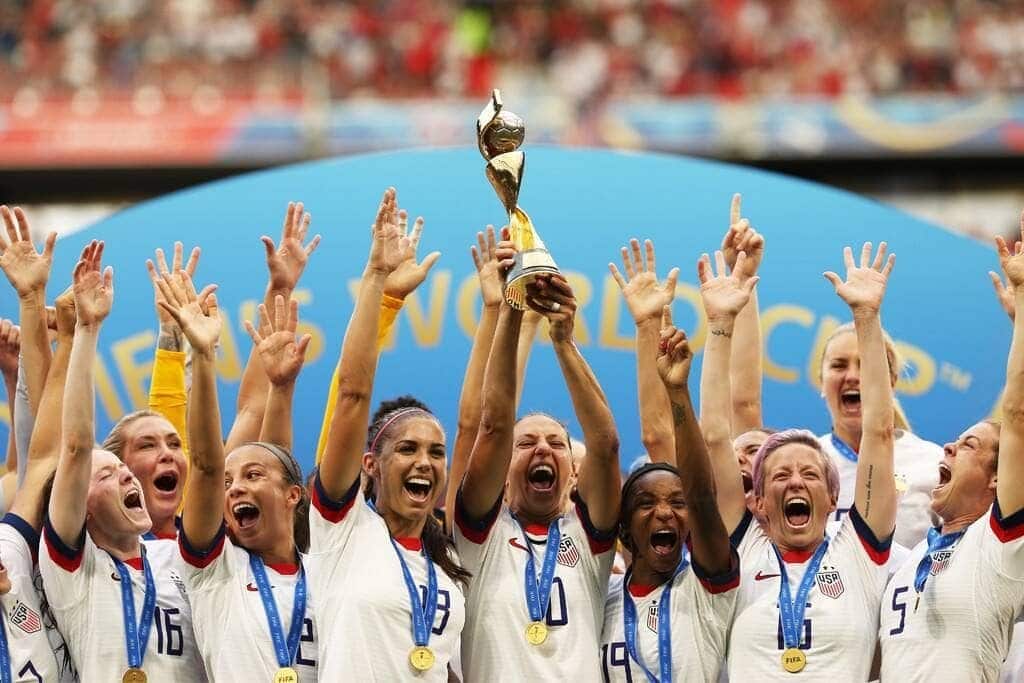 They came, they scored, and they won. Last Sunday the US women’s football team were crowned FIFA Women’s World Cup winners for the fourth time. This victory officially made the US women the most successful team in the history of the competition.  However, US President Donald Trump has been lukewarm in his congratulations to the women.

Politics on the pitch

This year’s Women’s World Cup has shown us many things. For instance, it is entirely possible to have a world cup tournament where fans behave themselves. Also, in England’s case the dreaded ‘penalty curse’ isn’t just limited to the men’s team. England captain Steph Houghton fell foul of the curse in the semi-finals losing out to US goalie Alyssa Naeher. Lastly, that politics can appear anywhere at any time even on the football pitch.

In a fiery response on Twitter, President Trump tweeted that Rapinoe “should WIN first before she TALKS!” 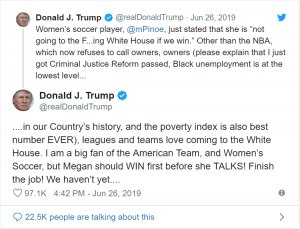 Perhaps now the president is eating his words, but if so he’s doing it alone. Since winning the tournament on Sunday no invite to the White House has been issued. Following the women’s victory, Trump was asked in an interview about a White House reception for the team. This was his response: “We haven’t really thought about it. We’ll look at that,”. Which seems like a pretty weak response to what was a momentous occasion. Considering the President’s checkered past, this really does feel like a missed opportunity.

Donald Trump’s attitude is in stark contrast to former president Barrack Obama. In 2015, following the US women’s FIFA Obama took out all the stops for the women’s football team. Besides publicly applauding their performance, Obama did extend a White House reception. The President also took on the ‘like a girl’ issue. In his speech, Barrack Obama said “Playing like a girl means being the best,” the President said at the end of his speech. “That’s what American women do. That’s what American girls do. That’s why we celebrate this team. They’ve done it with class. They’ve done it in the right way. They’ve done it with excitement. They’ve done with style. We are very, very proud of them.”

Meanwhile, Donald Trump has done precious little to show much appreciation to the team.

No one can argue that the US coach Jill Ellis hasn’t done a fantastic job. Backed by a talented squad Ellis steered the women to their fourth victory. In a similar approach to English coach, Phil Neville, Ellis was behind her team every step of the way. During her time on board, Jill Ellis presided over 127 games. Of which 102 were wins. In terms of the World Cup, Ellis is the only coach ever to see her team win back-to-back titles. An accolade that is definitely White House trip worthy.

However, Ellis was asked about a possible trip to the White House she said “I don’t know, I haven’t been invited so I can’t really say.” and when it was implied that it was a certainty Ellis responded, “Well I wouldn’t bet on that.”