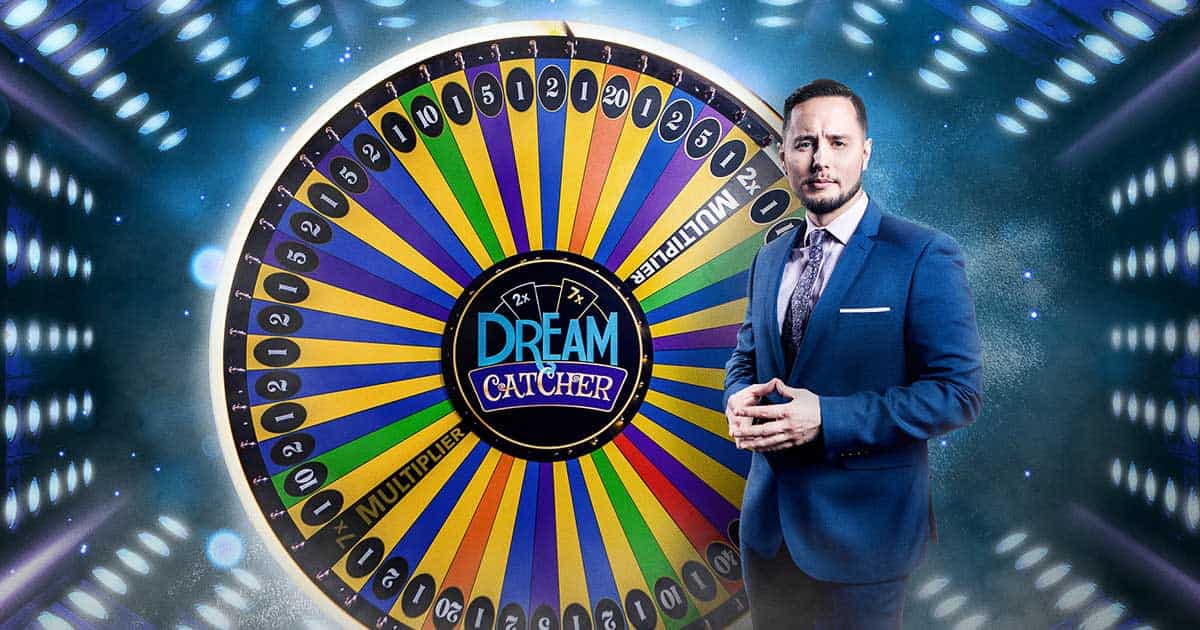 This exciting Wheel of Fortune style live game comes from stellar game providers Evolution Gaming. This live game format really elevates what is otherwise a simple game, adding a whole other exciting dimension. Fully immersive, this game allows players to chat with others playing the game as well as with the live casino dealers or hosts themselves, evoking a sense of being in a real casino rather than playing from home. It’s not only this that makes it fun though, but there are also two bonuses within the game as well as the chance to win some serious cash if things go well for you that is!

Dream Catcher is specifically designed with lovers of slots and bingo in mind. Prior to the release of this game, all other live games were focused on card and table games, leaving slot players high and dry. Not any more! This exciting Evolution Gaming studio game features a large wheel with 54 different segments, each in a bold colour. These segments have different numbers and two of the segments hold multipliers. The game here is to place a bet on which of these numbers the wheel will stop on. Made more exciting by live HD streaming from you can keep up with the action in real-time.

Players can check out SuperLenny’s online casino reviews to find the perfect place to spin the Dream Catcher wheel.

Whilst there aren’t any symbols per se, each of the different segments does represent a different number. These numbers are 1, 2, 5, 10, 20 and 40. The numbers are written in clear bold type, held within a dark blue circle; all the better to make them stand out. After all, you’ve got to see which of the numbers you’ve picked and spot if the wheel stops on it. The different numbers on each segment correspond to the payout you’ll receive if you had made a winning bet. This ranges from 1 to 1 through to 40 to 1.

The number 1 on the wheel is found on the 23 yellow segments. Landing this gives you the lowest payout at 1-to-1. Number 2 appears on 15 blue segments and number 5 on a mere 7 purple segments. Like the numbers, and therefore the payout, increase in size, so the number of segments carrying those numbers decreases. Thus, only 4 green segments carry the number 10, just 2 orange segments carry 20, while a single red segment carries number 40 with the best odds at 40-to-1. This last also has the highest house edge (9.19%) meaning you’re not so likely to land this, hence those higher odds.

What are the Odds of Winning Dream Catcher?

Multipliers x2 and x7 appear once each

As this entire game is about spinning the wheel, you’d think there might be a few bonus spins thrown in, unfortunately, this is not the case. However, there are two multiplier segments – a single double multiplier denoted by its black and silver colouring, and the 7x multiplier in black and gold. These two multipliers do increase the house edge when compared to games that do not offer these multipliers. However, these will be applied to the next spin you make meaning that your winnings could substantially increase if you successfully bet that the pointer will land on one of the higher numbers.

Unlike progressive slot games there are no specific jackpots attached to DreamCatcher in that there is no final cash prize that can be reached. Instead what you can hope for is to make the maximum win which, in the case of DreamCatcher, would be to successfully bet on the number 40 at the same time as having the 7x multiplier in operation. To really score the top amount though, you’d actually have to make the maximum bet too, which here is as much as 5000.00 per spin! So imagine that … a 40 to 1 payout with a 7x multiplier on a value of 5000 … it’s not to be sneezed at!

As this is not a slot game, there are no betting or pay lines here. Instead, the game works much more along the lines of roulette with the rules of probability dictating the likelihood of landing a meaningful win. This means that it can be useful to implement some kind of betting strategy to get better chances of winning. Of course, there is no perfect way to win and with rounds taking a mere 45 seconds, you’ll need to play at speed. Lenny’s Tip : betting on numbers with a greater frequency, though smaller payout, is the best option

Return to player rate or RTP is the theoretical amount of money that you can expect to walk away with after a period of play. For example, if you were to bet £100 over a period of time, and the RTP was 96%, you could reasonably expect to walk away with £96. However, the key here is theoretical as this is calculated over a period of thousands of spins. It’s unlikely that you will be spinning for this length of time and therefore you will not have the same RTP.  With Dreamcatcher, the RTP varies depending on which bet you are making from 90.57 – 96.58%.

The volatility level or variance of a game tells you how often and how big a win you can expect after each spin. As with the RTP, this will change depending on which of the numbers you are placing a wager on. The smaller numbers have a higher probability of landing, which will make the volatility quite low as they should land more often but will pay out smaller amounts. If you are hitting the number 40 consistently, then you’ll be playing with high volatility as the number won’t land so frequently, but when it does, it will pay out in a big way.

Not only does Dream Catcher offer a fun experience, but the addition of being able to converse with players and the HD, full angled cameras catching all the action in real-time, means that you’re fully immersed too! Here are some of Lenny’s favourite things about Dream Catcher