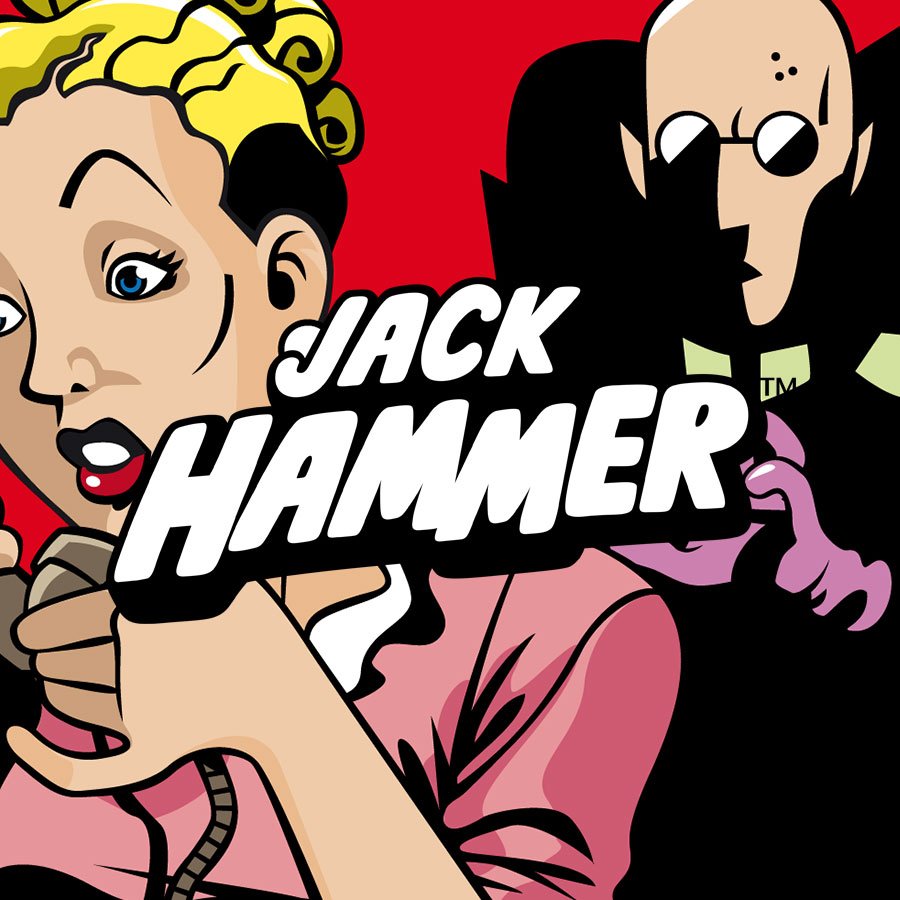 NetEnt’s Jack Hammer slot has been hugely popular ever since its release many years ago. The game offers up a fun detective theme that’s coupled with a unique 30s comic strip style backdrop. It’s not just about the looks of this game either, there are innumerable in-game features and bonuses that elevate this game above the rest. There’s even an in-game villain in the form of Evil Dr Wuten to really add to this old-worldly appeal. Read on to find out all the extra details of Jack Hammer.

There may be a second slot in this title now released, but the original Jack Hammer still holds sway over its sequel – albeit not by much. Despite only having 25 paylines instead of the 99 that its sequel has Jack Hammer manages to offer almost as many wins. In fact, the hit of wins is 2 to 3% which just edges out its younger sibling. Made to entertain, this online slot is home to a number of bonuses including sticky wins, multipliers and endless free spins.

The design of this slot is truly superb. Everything follows the 30s theme and that goes for the symbols too. The lower value symbols include a flask of poison, newspapers, a phone, mobsters with guns and airships. The four high value icons are the actual characters from this tale. These are the paperboy, a woman taking a phone call, Jack Hammer and of course, the Evil Dr. Wuten. Jack Hammer (he’s the detective), is the best of all of these offering as much as 40x your bet if you get five on a reel.

When it comes to bonus symbols, you won’t be found wanting. There’s a wild symbol too and this one will replace any icon to create additional winning combinations. This doesn’t hold true for the scatter (here it’s represented by the time bomb icon), as the wild can’t replace this. It’s the scatter that will trigger some rather elusive free spins. Personally, though, we’d like these to trigger a little more frequently then they do, though the sticky wins feature is pretty great and we’ll cover that in a moment.

The Ticking Bomb Free Spins is the fun name for this feature. Landing a minimum of five of the free spins icons will trigger the free spins round. The number of free spins that you get will depend on how many symbols you’ve got on the reels. Five icons gives you ten free spins, six awards 15 spins, seven scatters payouts out 20, eight a decent 25 and from nine to fifteen icons you’ll have to be content with a top of 30 spins. No matter how many free spins landed, you’ll have a triple multiplier.

There’s no specific jackpot on Jack Hammer, but the Sticky Wins feature amply replaces this. This feature activates every time you land a winning combination on the reels. The symbols that created the win are then locked on the reels and you get a second spin – for free. If a symbol lands that match the original win (that goes for wilds too), then that will lock into place too and you get a further spin. The respins progress until no new symbol or wildlands. The payout then occurs for the final matching symbols.

Jack Hammer as 15 reels and 25 paylines, which is a little unusual for a slot, but then again, NetEnt likes to make things different. These paylines can be played for a minimum of 25p a spin right up to an impressive £250. This enables a players of all budgets to get in on the action no matter what their budget. With the 3x multipliers in effect whenever you get free spins and the chance for respins, don’t be surprised if you end up with winning 3000x your initial stake.

RTP, also referred to as Return to Player rate, is the amount that you can expect to get back when playing a specific slot game. RTP is theoretical, though, and is calculated based on thousands of spins being made. Generally, you’re not going to playing thousands of spins, so it’s hard to expect the RTP will meet your expectations. That being said, Jack Hammer has a particularly high one of 97% meaning you could expect to get back £97 on every £100 spent, which isn’t bad going if you’re lucky.

Volatility is also sometimes described as variance but these are the same thing. Essentially volatility describes the frequency of wins and how big they will be. Low volatility slots will offer very regular wins but any payouts you get are likely to be quite small. High volatility on the other hand will see you earn big payouts but irregularly. Jack Hammer is a medium to high variance game offering a relatively regular turnover of wins, all of which are tend to lean towards the higher end of the scale.

Jack Hammer is a delightful looking slot thanks to its strong graphic comic theme. The visuals work well and coupled with the jazz soundtrack, you’re easily thrown back to the 30s era this slot is based on. There are some exceptional features to be found – streak and free spins, as well as those multipliers that kick in. Added to this is the option to win as much as 3000x your bet on a single spin. It should speak volumes that despite a sequel being released, players still return time and again to Jack Hammer.