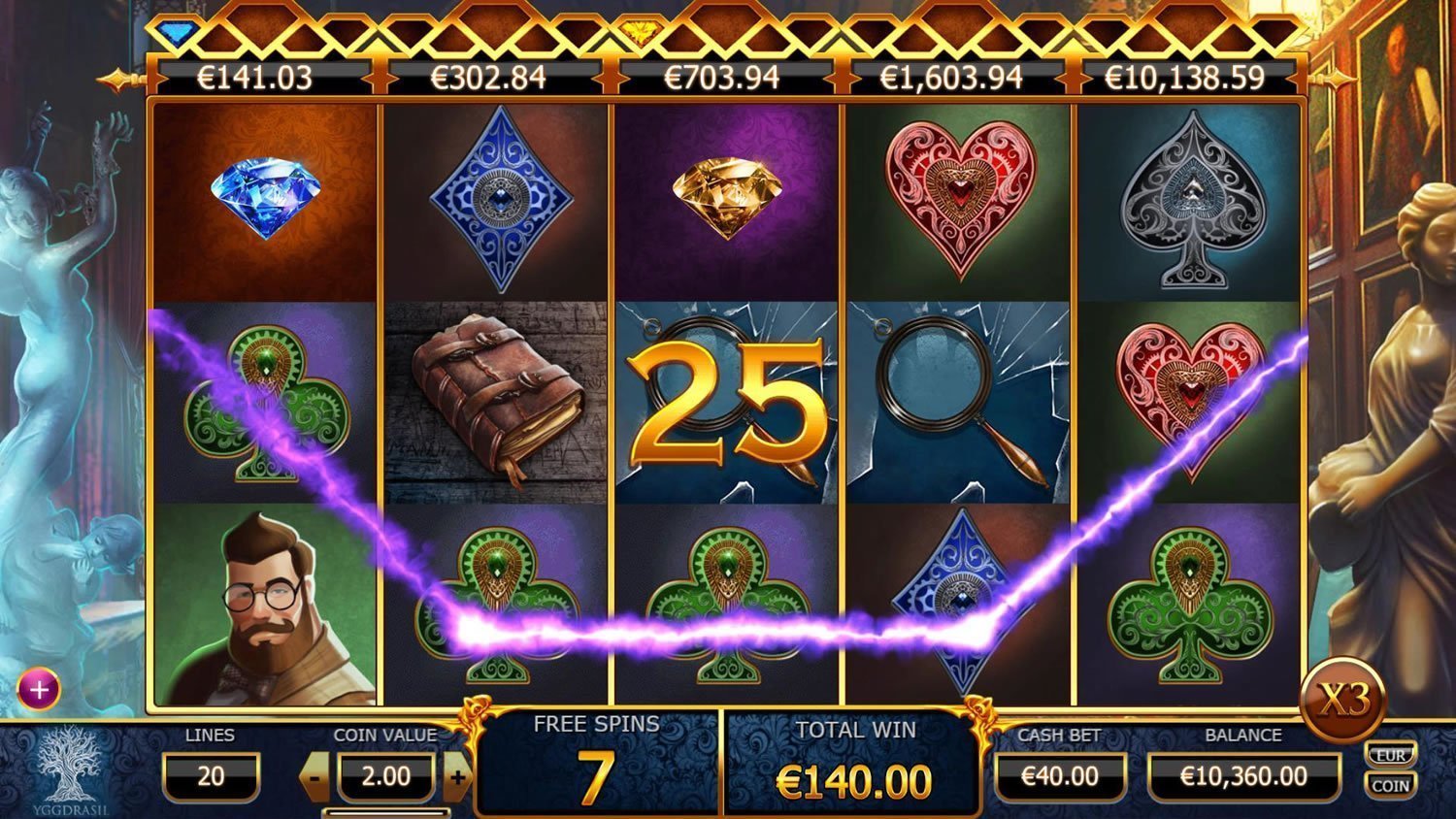 Holmes and the Stolen Stones

Join Sherlock Holmes and his trusted loyal sidekick Watson as they embark on yet another of their famous mystery solving missions – to find a treasure trove of stolen gemstones. Powered by Yggdrasil Gaming, Holmes and the Stolen Stones features a fun-filled 5 reels and a total of 20 paylines. Beautifully designed, this loosely Sherlock Holmes themed entertainment and adventure-packed slot offers a wealth of features including pick me and bonus spin rounds that can offer jackpots of up to 10,000 coins (T&Cs apply) and 5 progressive jackpots!

Holmes and the Stolen Stones: Features

The reels for this game are set against a backdrop of a long-forgotten warehouse. On either side of the reels, you will see two doors, with the first taking you to the bonus stage and the second to the bonus spins feature. Three or more bonus spin symbols (another keyhole) will also unlock the latter feature, awarding you 10 bonus spins with a 3x multiplier. Further triggering of this feature could also see you enjoy winnings of 1,000 coins with 4 bonus spin symbols, or even as much as 10,000 coins with 5 keyholes!

As you would expect from a game based on Arthur Conan-Doyle’s mythical man of mystery, the leading character himself Sherlock Holmes features as the most prominent character, followed closely by his trusty sidekick, Doctor Watson. Other somewhat unsurprising additions include the famous sleuth’s notebook and magnifying glass, with bejewelled playing cards providing the lowest paying symbols. The final grouping of symbols, two key scatters, trigger the two different bonus features. In order for you to have a chance of winning, three or more symbols must in sequence, beginning from the leftmost position, on a payline.

As well as the eight regular symbols, this game also sees you searching for coloured shards of glass. As you find more glass, meters above the reels begin to fill up. If you get five pieces of the same colour glass you can also trigger the bonus spins feature. In the “click me” game, you can also win extra coins or even more shards of diamonds! The absence of a wild symbol is one notable omission from this game, although the heightened sense of fun and adventure is a more than adequate substitute for this!

The bonus spins feature is triggered when 3 or more golden lock scatter symbols appear. When activated, this feature could see you win 10 free spins, with a win multiplier of 3x and possibly even more coins! The key symbols are the 5 shards of the same colour. Hit five of them on an active payline and you could win one of the progressive jackpots. However you cannot win more bonus spins than the initial amount as there are no bonus spin symbols featured in this part of the game.

This particular slot game boasts no less than five available local progressive jackpots. The low to medium variance nature of this game focuses on frequent jackpot wins. By activating the warehouse based bonus feature, your chances in the bonus spin jackpot game are increased. You too could win the jackpot if five diamond shards of the same colour are collected in the jackpot bonus spin mode. You are able to keep tabs on how many of each colour of diamond shards you’ve collected in the base game by monitoring the triangular windows above the reels.

The Holmes based hunt for treasure features the widely used and now very familiar 5 x 3 layout, which affords gamblers a total of 20 paylines. The game’s 20 fixed paylines, which begin from the far left reel, pay from left to right. Although betting is fixed at 20 coins per spin, you will have the option to change the coin, meaning that you are able to bet from as little as £0.20 and as much as £40 each spin, an option that affords you more control over what you bet.

As previously mentioned in this article, Holmes and the Stolen Stones is a progressive jackpot slot game, so it comes as some surprise then that it only possesses a Return to Player (RTP) percentage of 96.8%. This percentage puts this treasure hunt based slot game in the low to medium variance category, meaning that the house advantage for this particular game is 3.2%. However, even though this game does offer a relatively low RTP, the quality of the graphics and the sense of adventure felt whilst playing this game will more than make up for this.

In terms of volatility, with a score of 26%, Holmes and the Stolen Stones is classified in the medium-risk category. To put this statistic in the most simple terms, medium volatility slots are widely seen by players as being a pleasant compromise between high and low volatility games. Characterised by an average level of risk, these types of games are very popular with players such as yourself. Medium volatility games like this Holmes inspired slots is widely seen by players as a safer way of playing as the smaller stakes minimise the potential risk of losses.

Although this game only offers a low to medium RTP of 96.8%, the intensity and challenging nature of the game more than makes up for this. The graphics and realistic sound effects make you feel like you are helping Sherlock Holmes and Doctor Watson on their perilous fact finding mission. By collecting the gemstone shards you too can feel the sense of satisfaction that Holmes and Watson felt as they pieced together the fragments of their own mysteries. Instead of solving crimes, you are working towards the possibility of winning one of five progressive jackpots!