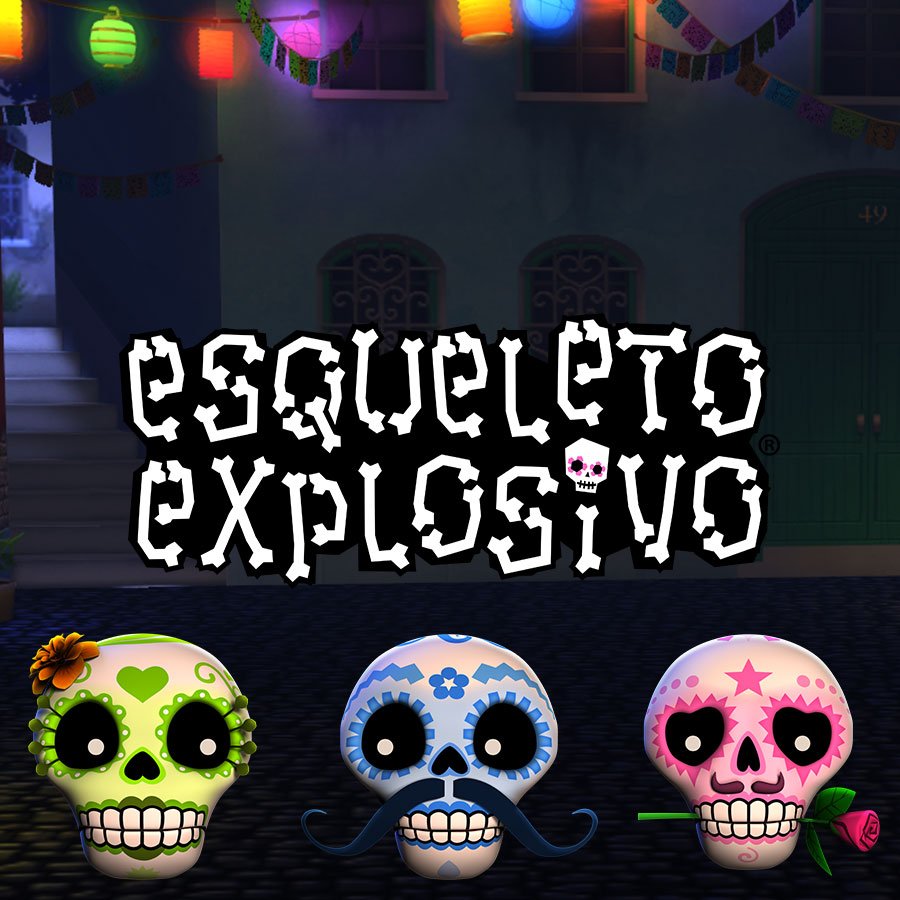 With 5 reels, 3 rows, 17 paylines and up to 32x multipliers, Esqueleto Explosivo is an intense and colourful adventure developed by Thunderkick. Set in a traditional Day of the Dead celebration, this innovative slot game features a Mariachi band (called Enrico Mortis and The Boners) composed of singing skeletons. Instead of typical spinning reels, the game uses dropping symbols – bright and colourful skulls – trying to make winning combinations while playing some festive music. Graphics are beautiful and intricate, taking players right into the middle of a Día de los Muertos celebration.

Esqueleto Explosivo features 15 symbols that occupy the reels looking for winning combinations. Anytime there’s a payline win, the dropping symbols feature is triggered and symbols are replaced by others, directly above, until there are no more winning combos. Consecutive wins with dropping symbols will also increase the multipliers, that range between x1 and x32. This colourful slot, packed with singing skulls, also has a Wild, called Explosivo (“Explosive”). It substitutes all other symbols, always triggers a re-spin and makes the adjacent symbols explode with it.

This slot features 6 symbols, each with a different colour, ranging from high to low pay. The pink one is the most valuable and pays 2.50 for 5 on a winning combination. The green and dark blue ones are medium pay, while the orange and light blue are the least valuable of the game, with the latter paying 0.70 for 5 on a lucky combo. The Explosivo Wild is a flamboyant yellow skull wearing sunglasses. It substitutes all the others and blows up the 8 surrounding symbols for a chance to increase winnings.

It’s a fact that the paytable on this game isn’t particularly high, but multipliers (called Mucho Multiplier) can climb up to a whopping 32x on continuous wins. This means that prizes can be pretty attractive, even more if your stakes are on the high side. The Mucho Multiplier is activated when the bright Elvis-like Explosivo Wild appears anywhere on the reels, causing an explosion and taking the adjacent symbols with it. Each winning made this way equals a step up on the multiplier ladder, so expect attractive earnings if the Explosivo shows up.

Esqueleto Explosivo doesn’t have any additional features, or bonuses, like Bonus Spins. But it’s such a fun game, that its “Enrico Mortis and The Boners” band, dropping skulls and explosive wilds make up for the lack of any extras. All the action of this slot game takes place during each spin, even though it would be nice to have a little something extra to spice things (even more) up. The only thing that Esqueleto Explosivo offers, as a sort of an extra, is the chance to trigger respins when the Explosivo Wild appears during gameplay.

Jackpots are one of those things that Esqueleto Explosivo also doesn’t provide. The maximum win in this slot game is 700x the stake, so depending on the amount wagered, players can win a value that ranges from a low 70 (for a maximum win with the lowest bet of 0.10) to a whopping 70.000 (for a maximum win with the highest bet of 100). Even though this specific Thunderkick slot doesn’t provide a jackpot to its players, that doesn’t mean that the game isn’t worth trying or that winnings are always low.

Paylines are one of the most important features of any slot game, and Esqueleto Explosivo has 17 of them to help players win attractive prizes. They pay left to right, with a bet range going from as low as 0.10 up to 100. The gameplay is very simple, and the wide variety of betting options make it a good choice for all sorts of players. The Esqueleto Explosivo symbols pay from 0.70 for 5 in a winning combo to the maximum of 2.50 for the most valuable of the set.

RTP is the return to player rate used by casinos and game developers to describe the expected payback percentage of a game. Esqueleto Explosivo has a 96% RTP, as per Thunderkick info. This means that players theoretically get a 96% return in winnings for each bet. So, if you wager 100 coins, you’re expected to get 96 coins back. If you’re playing for real money on any given slot, it’s essential to know your RTP rate back and forth. This will allow you to adjust the strategy and adapt your stakes in the best way possible.

Volatility determines the amount of risk each game has. It sets how much, and how often, players can expect to win during gameplay. Volatility can be low, medium or high and Esqueleto Explosivo is a low volatility game. This means that players can expect a low-risk game with smaller, but more frequent, winnings. After spending a bit playing a specific game, its volatility becomes obvious, even when developers don’t disclose this information. Low volatility doesn’t mean that big prizes don’t occur. They do, but not on the same scale as in a highly volatile game.

Esqueleto Explosivo is a great game, fun and entertaining, with colourful graphics and exciting gameplay. Even though it’s simple and doesn’t have much extras or bonuses it really deserves a go. Like many other Thunderkick games, this slot is pure joyous, a one size fits all experience that will take players right into the centre of the action. The music and theme stand out and really complements the gameplay. It’s a slot game made to all sorts of players, and everyone will enjoy it. Arriba! Arriba!