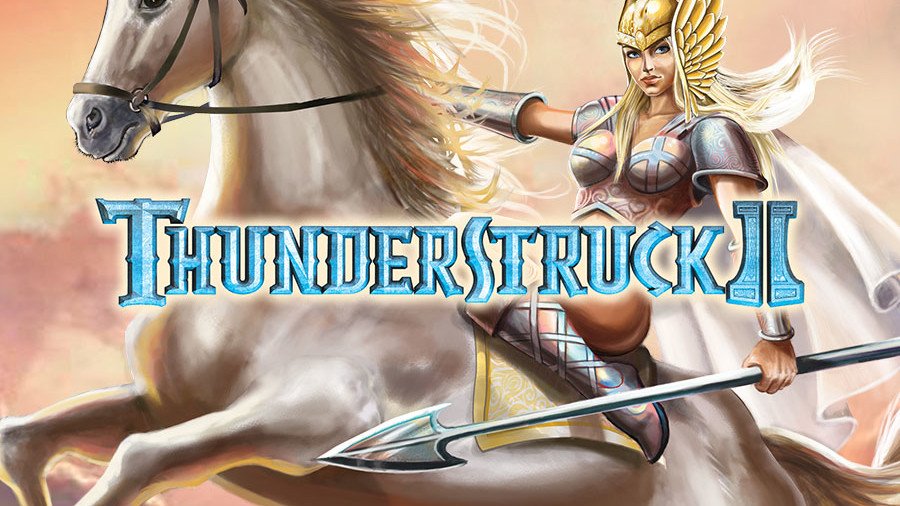 Thunderstruck II may be a relatively old slot in the scheme of things, but Microgaming definitely hit a winner with this one. Based on the Norse gods, including Loki, Odin, Valkyrie and Thor, this is actually the second and more popular game in the series. Whilst the graphics are now a little dated, the soundtrack and gameplay are still more than epic. And then, there are the wins, which we will get to in a bit. Why else do you think this game has stayed around for so long?

Thunderstruck II has a rather impressive setup. It may have five reels but it has a massive 243 different ways to win, which really opens things up to players when it comes to making some winning combinations. It’s also very budget-friendly, enabling you to place bets from as little as 30p right through to £15 per spin. And that’s not all. There are a hefty number of bonuses in place and there’s a rather impressive jackpot at the end of it all. If you’re lucky, that is.

As this is all about the Norse gods, it comes as no surprise to find that the top-paying symbols are the gods themselves. The four aforementioned gods feature prominently and are also joined by Viking longships and Valhalla. If you’re looking for the most lucrative symbol, though, cast your eye over to Thor as he rewards you with as much as 16.67 times your initial stake if you can get five of him on a payline. There are lower value icons, too, and these are Viking rune-like 9, 10, J, Q, K and A symbols.

There are also some bonus symbols that you need to be aware of if you plan on getting anywhere with this game. An important symbol, the wild, is represented by the Thunderstruck II logo. This replaces any symbol except for the scatter icon, depicted here by Thor’s Hammer. Landing any wild in a winning combo will double its value, but land five wilds on a reel and you can earn 33.33 times your bet. Better yet, there’s a Wildstorm feature, which, if triggered, can turn all five reels completely wild earning you 1000 times your stake!

Hall of Spins is the main feature and is triggered by landing 3 to 5 scatters. This feature has four levels, and you can access the different levels when you have activated the feature a specific number of times. Valkyrie occurs at the first trigger and awards 10 spins and a 5x multiplier. Loki happens on the fifth trigger awarding 15 spins and a Wild Magic feature. Odin happens at the tenth time and pays 20 spins and a Wild Raven feature. Thor occurs after 15 times and pays 25 spins plus Rolling Reels.

When it comes to the jackpot wins that you can get from Thunderstruck II, a lot of this comes down to the different features you get access to. What’s really important here is that once you’ve accessed the Hall of Spins 15 times, you can then choose which bonus you want to make use of. The most lucrative option comes from triggering the Wildstorm feature alongside the Loki feature with its 5x multiplier enabling you to get 8100 times your stake. With this in mind, if you can afford it, play big!

Unlike other, more traditional slots, Thunderstruck II does not have set paylines in the traditional sense. Instead, it offers a massive 243 different ways to win. This really increases the chances of landing matching icons and thus improves your options of making a killing. These different winning ways are permanently set within the game so, unlike other slots, you can’t reduce or increase the number of paylines when you change your bet. But with the sheer number of winning chances, why on earth would you want to!

The return to player rate, or RTP, is the theoretical return you can expect from a slot when you spin the reels. But, the key here is that it is theoretical. These RTPs are generally calculated from thousands of spins, so spinning for a short time won’t mean you’ll have the same RTP. Thunderstruck II offers an impressive RTP that ranges between 96-97% putting it at the higher end of the scale. This means that, theoretically, if you were to wager £100, you can reasonably expect a return of £96-£97 after a session.

Volatility is another important aspect when choosing a slot game. This refers to the likelihood of a win and how big that win will be. Low volatility games will pay out often, but the amount is small. On the other end of the scale, high volatility games will see you endure long dry spells before a massive win comes your way. Happily, Thunderstruck II is settled nicely between the two as it is medium variance, meaning you’ll get a regular turnover of wins, at a pretty nice value.

Thunderstruck II is an incredibly well-crafted and balanced slot run on some rather impressive gaming mechanics. Having stood the test of time, we highly recommend giving it a try. From the theme right through to the gameplay, there’s absolutely nothing that could be better. The Hall of Spins feature is really something to behold and, when the gods are smiling on you, there’s a lot you can win from just a single spin. Why not give it a spin now, we know you won’t be able to stop!